Letterkenny, 15 July 2022: FinTrU, a technologically-enabled Regulatory Solutions company, specialising in the areas of KYC, Compliance, Legal, Risk & Controls and Operations, has announced the establishment of a European Delivery Centre in Letterkenny and the creation of 300 jobs over the next five years.

Established in 2013 and headquartered in Belfast, FinTrU designs technology-enabled solutions for Investment Banks across the world. FinTrU currently employs more than 1,000 people worldwide with offices in Belfast, Derry/Londonderry, Dublin, London, Maastricht, and New York. In March 2022, FinTrU was named by the Financial Times as one of Europe’s Fastest Growing Companies for the second year in a row.

This project is supported by the Irish Government through IDA Ireland.

Taoiseach Micheál Martin said: “FinTrU's announcement that it's creating 300 jobs, providing new opportunities in Letterkenny, Donegal and the North West is wonderful news. Ireland has established itself as a leading global financial services centre and we are committed to building on this success. The new positions announced today by FinTrU are testament to the company’s growth and achievements, as it invests in, and benefits from, skills and talent from across the whole island. I wish FinTrU many more years of continued success in their operations here.”

FinTrU Founder & CEO, Darragh McCarthy, said “We are extremely excited to announce the news of our North West regional expansion with the establishment of our Letterkenny site. FinTrU has enjoyed a great relationship with the North West region, having set up our Derry/Londonderry office in October 2018, with over 300 employees presently working at this site.

We already employ several people from Letterkenny and the wider County of Donegal, so it was a natural step for us to open an EU Delivery Office right here in Letterkenny. The highly educated and ambitious talent based here in Donegal was a major motivating factor in FinTrU choosing Letterkenny as the next EU base. This new location will further support FinTrU as we continue to work with the largest International Investment Banks across the world.

FinTrU has forged a great partnership with IDA Ireland, Donegal County Council, Donegal  Education & Training Board (ETB) and the Atlantic Technological University over the years and we are delighted to be working with them in delivering this project over the years to come.”

FinTrU is currently recruiting in the areas of compliance, legal and operations.  To explore these opportunities, visit here.

FinTrU has also launched a graduate recruitment program, the FinTrU Financial Services Academy, with applications now being accepted. Candidates will be considered from all degree disciplines.

IDA Ireland CEO Martin Shanahan said “Last week, IDA Ireland announced that 73 of the 155 investments won by the agency in the first half of 2022, went to regional locations, including here in Co. Donegal. The mid-year results announced last week and this announcement today, demonstrates IDA Ireland’s continued commitment to winning jobs and investments in regional locations   This is, without doubt, a red-letter day for Letterkenny. This investment, creating 300 jobs in this region is hugely significant. It represents confidence by FinTrU in the North West and will be a substantial boost to the local economy.  I wish FinTrU every success with this expansion.” 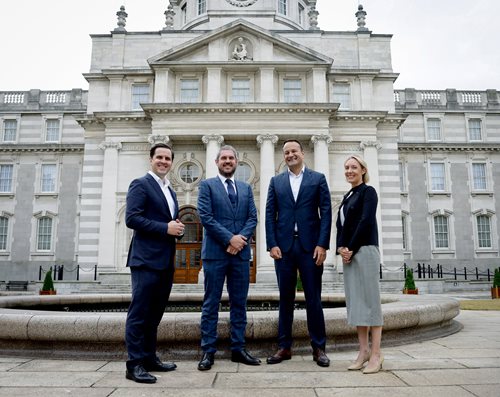